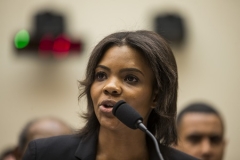 In an interview with Fox News Host Tucker Carlson following the conviction of former Minneapolis police office Derek Chauvin, Owens was asked why America has a one-sided justice system, in which violent crimes by liberals are excused, and even defended.

“Because we have two pandemics going on right now,” Owens replied:

“We do not have people that are sitting in Congress willing to take this fight where it needs to be taken,” Owens said, contrasting the way media vilified former President Donald Trump’s call for a peaceful and patriotic march on the Capitol with the way they defend Rep. Maxine Waters’ (D-Calif.) multiple calls for violence:

“There has been so much that has been going on in this country that is wrong. You’ve talked about it. I’ve talked about it. But we do not have people that are sitting in Congress willing to take this fight where it needs to be taken. By the way, what about Maxine Waters inciting violence? I'm so old, Tucker, that I remember when a man said (to) march peacefully and patriotically to the Capitol and that was considered an incitement for violence, right? That was like, ‘Oh, my God, stop the press, get this person disappeared from social media because he is calling for violence.

“Look at what Maxine Waters says. No one in the media's condemning these remarks. That same media that condemned Trump and his supporters for weeks on end is now defending Maxine Waters, and we both know this is not the first time that Maxine Waters has incited violence. Don't forget: ‘Rush down, if you see a Trump supporter, you’ve got to rush them down in the restaurants.’”

“They get away with virtually everything because we do not have strong people on our side that are willing to stand up. It is a sad conclusion. And, it is really so frustrating.

“And the idea of martyring George Floyd, the way that Nancy Pelosi spoke about him. It completely forgives all of the trauma that he brought against his victims while he was alive, you know. A man that served seven-plus stints in prison while he was alive, armed robbery being two of the reasons why. And now we are going to martyr him and say that your name will forever be synonymous with justice? Imagine, Tucker, if you are one of his victims that is alive, one of his victims that he arm robbed, and you have to hear that this man's name will always be synonymous with justice, how would that feel to you?”

Owens said Americans have allowed themselves to be bullied into living in a “fiction” created and enforced by the liberal mob, because they aren’t strong enough to stand up for reality: