Black Leaders: Bring Back NYPD’s Undercover Cops, ‘Blood Is on the Hands of Mayor and State Legislature’ 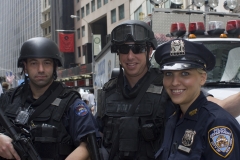 With violent crime surging in New York City, Black community leaders are calling for New York City to bring back a plainclothes Anti-Crime Unit that was recently abolished amid calls to “defund the police” that resulted in a $1 billion cut in the NYPD budget.

Without the presence of the undercover police, criminals now believe they can do whatever they want, Brooklyn Borough Pres. Eric Adams warns, Yahoo! News reports:

Brooklyn Borough President Eric Adams, one of the African-American voices calling for action on gun violence, criticized the police force’s decision to completely disband the unit. He deplored the recent deadly shooting of a one-year-old, one of the victims of New York City’s recent spike in gun violence.

“I think that a total elimination is something we need to reevaluate,” Adams said, CBS New York reported. “Right now, bad guys are saying if you don’t see a blue and white you can do whatever you want.”

Over the past month, New York City’s murder rate has more than doubled and the number of shootings has surged 45% - and Black community activist Tony Herbert lays the blame on the city officials who have eliminated the city’s plainclothes police unit:

“The guns keep going off and now we have a 1-year-old and the blood is on the hands of the mayor and the state Legislature.”