Biden Says He ‘Can’t Think of Anyone Better’ than FEMA Director – Then, Appears to Forget Her Name 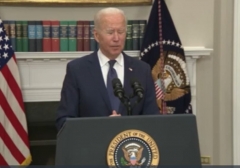 On Sunday, President Joe Biden appeared to forget the name of his FEMA director as he was saying he couldn’t “think of anyone better to lead the response to Hurricane Henri.”

In a speech discussing Tropical Storm Henri, Biden stammered and struggled to remember FEMA Director Deanne Criswell’s name, closing his eyes to collect his thoughts, even though he had just spoken with her before going onstage:

“I can’t, uh, think of anyone better to lead this operation than, than uh, uh, Deanne (closes eyes)…Criswell of, of FEMA.

“Um, she’s, she…before she headed up FEMA, she led the emergency response in New York City and she was one of the key federal officials leading our response to superstorm…Superstorm Sandy.”

“He reportedly spoke with Criswell right before he went to the podium,” according to an account by The Daily Mail, which notes that “Critics say the flub - which came during a press conference on his withdrawal from Afghanistan, and Tropical Storm Henri, is further evidence of Biden's cognitive decline.”