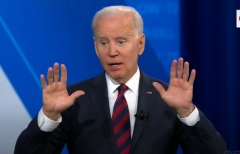 During a Friday press conference, President Joe Biden blamed the Taliban’s takeover of Afghanistan on “a total demise of the Afghan national force” – which, he said, consists of “300 persons.”

Biden made the claim that the Afghan national force consists of 300 persons while he was fielding a reporter’s question about why the U.S. didn’t conduct the evacuation of Americans and their allies before starting to withdrawing troops:

Reporter: “Given the negotiations with the Taliban, the scenes that we’re seeing, can you just fully explain why the plan wasn't to go ahead with these evacuations of both Americans and allies before the drawdowns began, before Bagram was closed, looking back several months?

“Because, whether it was now or several months from now, there seems to be a broad consensus that the Taliban would make these gains and these would be needed, at some point.”

Pres. Biden: “Well, yeah, at some point. But the point was that, although we were in contact with the Taliban and Doha for this whole period of time, at some point, it wasn't expected to be a total demise of the Afghan national force – which is 300 persons.

According to a July 31, 2021 report by the Special Inspector General for Afghanistan Reconstruction (SIGAR), there were 300,699 personnel in the Afghan National Defense and Security Forces (ANDSF) – of which 182,071 served in the Ministry of Defense (MOD) – as of April 29 of this year:

As Yahoo! News and The Washington Post have reported, Biden has previously claimed the Afghan force was approximately three hundred thousand, not three hundred, and may have been mistakenly citing the inspector general’s estimate of 300,699, which includes 118,628 employees of the Ministry of the Interior (MOI)