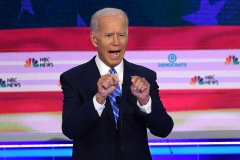 For the second time this year, Democrat presidential nominee Joe Biden grossly exaggerated the number of coronavirus deaths while visiting Pennsylvania, claiming hundreds of millions, instead of thousands have died.

Biden made the latest gaffe during a campaign speech in Philadelphia, Pennsylvania on Sunday:

“If Donald Trump has his way, the complications from COVID-19, which are well beyond what they should be — it’s estimated that 200 million people have died — probably by the time I finish this talk.”

As The New York Post notes, when Biden was speaking in Lancaster, Pennsylvania back in June, he claimed 120 million had died from the coronavirus, but eventually corrected himself:

Biden made a similar comment when he added several extra zeroes to the nation’s coronavirus death toll during a campaign stop in [Lancaster] Pennsylvania in June.

“Now we have over 120 million dead from COVID,” the former veep said at the time before correcting himself to say “120,000,” which was not captured by the pool cameraman.