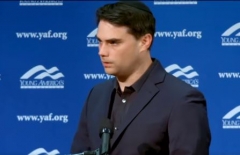 Lying to children about gender confuses them and could do significant harm, father and Daily Wire Editor Emeritus Ben Shapiro says.

Addressing the Young America’s Foundation (YAF) in a video posted to the organization’s Facebook page Tuesday, Shapiro warns that teaching transgenderism to a child is damaging to that young, impressionable child’s psyche:

“If I teach my nearly four-year-old girl that she can become a boy, then I think that is not only lying to her, I think it’s confusing her and I think it’s damaging to her psyche.

“One of the premises of the transgender movement is that human minds are completely non-malleable. That, oddly enough, men are not men and women are not women – but, if you are transgender, that is unchangeable, especially among children. If a three or four-year-old has certain feelings, those feelings have to be taken completely seriously. We can’t fight against them. We can’t suggest that the kid will grow out of it. Instead, we have to say, ‘This kid is inherently transgender.’

“I can tell you, having kids, kids are incredibly malleable. Kids are easily confused.”

Shapiro says he has no tolerance for the transgender movement’s efforts to lie to children in order to accomplish its underlying goal of “redefining a key term for the entire society”:

“They’re having drag shows in kindergarten now, in some areas. When you do that, when you confuse kids about gender, you’re doing the kids no favors.  You could be doing them significant damage, to kids.

“I am not in the mood for countenancing lies about what men and women are, specifically when I think that there is a goal of redefining a key term for the entire society.”