‘Babylon Bee’ Takes Flight on Twitter, After Being Stung with Suspension

“We're back. Let that sink in,” satirical website The Babylon Bee tweeted Friday, after its account on the social media platform was reinstated, following a months’ long suspension.

“Kathie Griffin, Jorden Peterson & Babylon Bee have been reinstated,” but “Trump decision has not yet been made,” Twitter’s new owner, Elon Musk, announced on the social media platform on Friday.

The Bee’s slogan, “Fake news you can trust,” is just a hint at what’s to come on the parody news website, which features stories like, “Caravan Of Liberal Americans Makes Way Toward Socialist Paradise Of Venezuela.”

The last story posted (Mar. 20, 2022) on The Bee’s Twitter account before its suspension, was titled, “Nation Wishes There Were Some Way They Could Have Known About The Hunter Biden Laptop Story Before The Election.”

In an odd coincidence, at the time of The Bee’s last tweet, a controversy was raging over Twitter’s censorship of a New York Post article – published just a few weeks before the 2020 presidential election – breaking the news of the Hunter Biden laptop scandal. 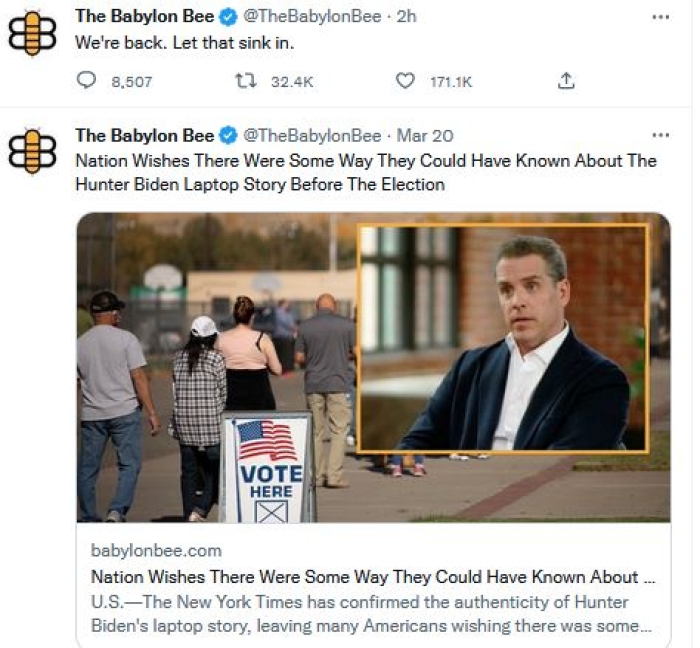 Ironically, Elon Musk retweeted that very New York Post article on Friday, after lifting the suspension, commenting “If only there had been a way…” (Followed by two “Rolling on the floor laughing” emojis).

And, as if he were psychic, on Thursday Musk appeared to predict what The Bee would say in its first tweet on Friday: “Let that sink in.”