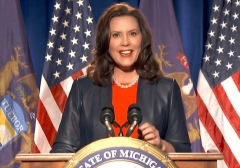 Despite her vocal opposition to building border walls to keep Americans safe from illegal immigration, Democrat Michigan Governor Gretchen Whitmer is having an eight-foot high, electrified fence built around her official residence to keep out unwanted visitors.

The fence is just one part of a $1.1 million, taxpayer-funded security upgrade to the governor’s residence, The Detroit Free Press reports:

In recent weeks, crews have been working to build what appears to be an eight-foot-tall fence around the governor's residence property. Last week, a sign on the site where crews were on the job warned, "Danger. High voltage. Unauthorized persons keep out."

“It's unclear how much is being spent on the perimeter fencing that's being installed,” the paper reports.

As The Washington Free Beacon notes, Gov. Whitmer has called the construction of barriers on the U.S. borders too costly and ineffective:

Whitmer, a Biden surrogate, has attacked the idea of using barriers to prevent illegal immigration. She called President Donald Trump's border wall "costly and ineffective" in February 2017, nearly a week after suggesting that money for the wall would be better spent elsewhere.

"$40 BILLION for the wall," Whitmer tweeted. "Think how many kids that would educate, how many roads, bridges and pipes it would fix."

Whitmer also campaigned against Trump's wall in 2018, saying, "it is time we get back to building bridges, not walls."