Reacting to news of how a robotic police dog responded to a home invasion crime scene in the Bronx this week, Ocasio-Cortez took to twitter Thursday to accuse the “Digidog” of racism:

“Now robotic surveillance ground drones are being deployed for testing on low-income communities of color with under-resourced schools.” 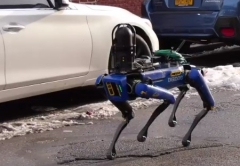 Ocasio-Cortez suggests that the robotic police dog program should be defunded, because its money would be better spent on school counseling:

“Shout out to everyone who fought against community advocates who demanded these resources go to investments like school counseling instead.”

The congresswoman’s tweet is a reaction to a New York Post article reporting on Digidog’s deployment on Tuesday:

“Video shows the blue and black, four-legged “Digidog” trotting along the sidewalk, joined by its handlers.

“The videographer, Daniel Valls of FreedomNews.tv, wrote that the dog responded to a home invasion and barricaded situation on East 227th Street near White Plains Road in Wakefield.”

Utilizing artificial intelligence, the 70 pound Digidog features two-way communication, can run and climb stairs and is equipped with cameras and lights. It is still in the testing phase.