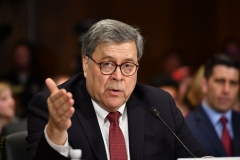 Leftist politicians have lost all interest in compromise and the exchange of ideas because they only value “total victory,” Attorney General William Barr said Sunday in an appearance on “Life, Liberty and Levin.”

The Left believes the entire American system and its institutions must be torn down in order to achieve their goal of total victory, Barr said:

“Nowadays, you have, I think the left has essentially withdrawn from this model and really represents a Rousseauian Revolutionary Party that believes in tearing down the system. That what’s wrong about America today all has to do with the institutions we have and we have to tear them down.

The Left has replaced religion with a passionate, ruthless quest for victory based on their belief that everything in life is political, Barr said:

“It’s a secular religion. It's a substitute for religion. They view their political opponents as evil – because you stand in the way of their progressive utopia that they’re trying to reach.

“And, that’s what gives the intensity to the partisan feelings that people feel today. Because, for them, this pilgrimage we’re all on is a political pilgrimage and everything is reduced to politics.

“For people who don’t have that perspective, politics is important, but it’s not the whole purpose of life.”