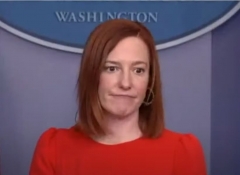 Conservative actor and Filmmaker Kevin Sorbo poked fun at White Press Secretary Jen Psaki’s evasiveness Wednesday, offering up his “impression” of her response to a question from the media.

In the same tweet, Sorbo took a shot at Democrats’ boasting about the sexual “diversity” in the Biden Administration:

“How does the biden administration plan on saving American lives from covid-19?”

“Yea I’ll have to circle back on that but in the meantime did you know we have a pansexual accountant?”

Press Sec. Psaki has become famous for replying “I’ll have circle back to you,” instead of actually answering reporters’ questions – a non-response Fox News reports has begun vexing reporters:

“Now, whether that’s a tick, a lack of preparedness or an intentional lack of specificity which would later have to be defended, the lack of clear answers are a growing frustration for many.”

Psaki’s go-to response has even inspired a viral video montage of her mantra created by video clip service Grabien.com.

Ironically, the White House YouTube channel features a video by Psaki titled “White House Press Secretary Jen Psaki Answers Your Questions” in which she promises that it’s her “goal” to answer the hard questions from reporters.

Among the questions Psaki tackles in the video are queries about President Joe Biden’s love of ice cream and whether she’ll provide regular updates about the First Feline.