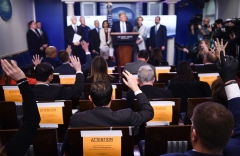 Only 27% of the nation’s likely voters believe most major news organizations “generally remain neutral” in their political coverage, while 63% say most media have an agenda they’re promoting, a new Rasmussen survey reveals.

In a survey of 1,000 U.S. Likely Voters conducted July 15-16, 2020, Rasmussen found that nearly two-thirds believe most media have a political agenda:

“Do most major news organizations in this country have their own political agenda, or do they generally remain impartial?”

Less than half (42%) of Democrat voters perceive a political agenda in media, compared to 87% of Republicans and 63% of those with “Other” affiliations.

Asked “How do you get most of your political news?” nearly three-fourths (73%) of likely voters cited either television (44%) or the Internet (29%) as their primary source.

Additionally, 69% of those who get most of their news from sources other than those listed above and 65% of those who said they weren’t sure where they get their news said they believe most major news organizations are pushing an agenda.