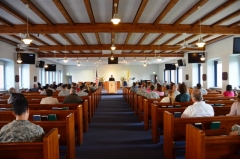 While one in four registered voters now say it’s time for the U.S. to split into two separate countries – Red (Republican) and Blue (Democrat) – a much higher percentage of regular churchgoers and Evangelical Christians favor the idea.

A quarter (25%) of U.S. voters say they either “Strongly Favor” (11%) or “Somewhat Favor” (14%) dividing the country into two, based on each state’s political leaning:

While 32% of Republicans and 22% of Democrats say they favor the split, support is stronger among respondents who are either “Very Conservative” (43%) or “Very Liberal” (33%).

Regular churchgoers are more likely to favor dividing into Red and Blue Americas, as 40% of those who attend church more than once a week support the move, compared to just 18% of those who never go to church:

By religious persuasion, Evangelicals (43%) are the most likely to support the two-country plan, while those of other faiths approximate the national average: