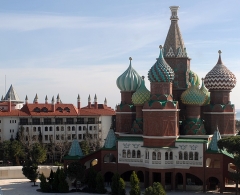 The Kremlin in Moscow
(Screenshot)

“Given the current global conflict, it is crucial that the Committee exercise its investigative powers to shine a spotlight on alarming reports of Russia’s attempt to buy influence in U.S. politics through domestic environmental groups,” says the letter sent to Maloney on Thursday.

The 20 members of Congress are requesting a hearing on alleged coordinated attempts by Russian entities to buy influence and finance U.S. environmental non-governmental organizations (NGOs) in an effort to reduce the energy security of the United States.

Russia’s invasion of Ukraine has made it imperative to launch a probe of NGOs’ financial ties to Russia, Thursday’s letter to Chairwoman Maloney says:

“Given the impact that Russia’s control of the European energy market has had in the lead up and prosecution of the war in Ukraine, it is critical that Congress gains a better understanding of the role that Russian financing has had in shaping American environmental policy and sentiment.

“We respectfully request you use the authority of this Committee to immediately convene a hearing to obtain answers from NGOs on their financial ties to Russia and their willingness to push foreign propaganda that interferes with U.S. energy policies and interests.”

Last Thursday’s letter is just one of recent calls for Congress to renew its investigation of the potential threat to U.S. energy independence.

On March 7 of this year, Rep. Bill Johnson (R-Ohio) sent a letter Chairwoman Maloney and chairs of three other House committees asking that they reopen and “build on” the investigation conducted by the House Science, Space and Technology Committee in 2018.

“Investigate Russia's covert funding of US anti-fossil fuel groups,” Merrill Matthews, resident scholar with the Institute for Policy Innovation in Dallas, urged in a March 1, 2022 commentary in The Hill.

On March 1 of this year, The Federalist published a piece by former U.S. Environmental Protection Agency (EPA) official Samantha Dravis titled, “Stop Letting Environmental Groups Funded By Russia Dictate America’s Energy Policy.” “It is time for Biden and Democrats to wake up and stop their blind allegiance to environmental groups who attack American energy and have links to foreign countries,” Dravis wrote.