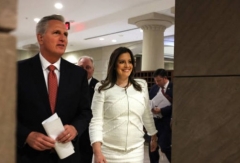 House Minority Leader Kevin McCarthy and Rep. Elise Stefanik emerge from the May 14, 2021 meeting where Stefanik was elected chair of the House Republican Conference. (Photo by Anna Moneymaker/Getty Images)

Rep. Elise Stefanik (R.-N.Y.), who was elected on Friday to replace Rep. Liz Cheney (R.-Wyo.) as the chair of the House Republican Conference, voted for the pro-transgender Equality Act when it came up for a vote in 2019.

(To see the 2019 roll call vote on the Equality Act click here.)

When it came up for another vote this February, she voted against it. (To see the 2021 roll call vote on the Equality Act click here.)

“U.S. Rep. Elise Stefanik was one of a handful of Republicans to vote in favor of an gay, lesbian and transgender rights bill in 2019, and as recently as Tuesday she told the media she was for the measure again,” the Albany Times Union reported on Feb. 26.

“But on Thursday afternoon, when the Equality Act returned to the House floor, the Schuylerville Republican cast a vote against the legislation, although the text of the bill had not changed substantively from two years ago,” said the Times Union.

“Stefanik on Friday declined to comment to the Times Union on why she changed her vote,” said the paper.

Back in 2019, Stefanik was one of the very few Republican House members who voted for the bill.

“Stefanik was one of eight Republicans who voted yes on the bill in 2019,” said the Times Union.

Stefanik was elected chair of the House Republican Conference on Friday over Rep. Chip Roy (R.-Texas) by a vote of 134 to 46.

“Earlier this week, conservative groups including the Heritage Foundation, Family Research Council, Family Policy Institute and Save Women's Sports held a virtual rally to lobby against the bill, calling it the ‘most dangerous piece of legislation to come out of Congress,’” the Times Union reported in February.

It linked to a page about the virtual rally posted by the Family Policy Alliance that offered its analysis of the Equality Act.

"This week, the U.S. House will vote on a bill known as the 'Equality Act'—the most dangerous piece of legislation to come out of Congress.

"This bill would create new protected classes based on a person’s self-identified sexual orientation and gender identity. If it became law, the Equality Act would pose serious threats, especially to women and children across the nation:

"--Introducing explicit content in school curriculum across the nation

--Closing the doors of faith-based foster and adoption agencies

"--Denying parental rights in the name of a sexualized political ideology

"--Silencing all of us who disagree

“The Equality Act would bring these harms nationwide, with the force (and taxpayer money) of the federal government behind them. That’s a huge threat.”