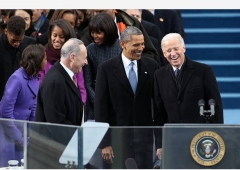 Senate Majority Leader Chuck Schumer (D.-N.Y.) sent out a tweet on Thursday summarizing the situation he sees America facing one week into the administration of President Joe Biden.

“Businesses are closing,” he said.

“Restaurants and bars are in crisis,” he said.

“We are in the midst of a once-in-a-century crisis,” he explained.

“It requires a once-in-a-century effort to overcome it,” he concluded.

In a tweet sent out an hour earlier, Schumer had quoted Treasury Secretary Janet Yellen: “The smartest thing we can do is act big.”

President Biden has asked Congress to enact a $1.9 trillion stimulus bill in response to the COVID pandemics. This would follow at $2.3 trillion COVID-relief bill enacted last March, and $900 billion appropriated in December, bringing total COVID spending if Biden’s plan is enacted to $5.1 trillion.