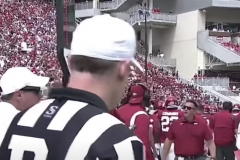 Police officers had to escort a referee off the field of an Alabama vs. Tulane post-season football game played in New Orleans in 1921 after the referee invalidated a play in which Tulane scored on a 50-yard passing play.

The referee said he blew the whistle that signaled the end of the game before the play began.

If the play had stood, Tulane would have tied the score. With the play reversed, Alabama won 14 to 7.

“An attack on Referee Finley, former Virginia player, came at the end of the post-season football game between University of Alabama and Tulane, which Alabama won here today, 14 to 7,” said a report in the Dec. 4, 1921 edition of the Chicago Tribune.

The headline on the story said: “Mob Attacks Referee When Alabama Beats Tulane Eleven, 14 to 7.”

“The attacks resulted when Finley ruled that a fifty yard forward pass from Legendre to Maloney of Tulane, who ran ten yards for the touchdown to tie the score, was illegal, as he had blown the whistle for time on the period,” said the report.

“Newspapermen agreed the ball was in play when the whistle blew, but Finley ruled otherwise and had to be escorted from the field by the police.”