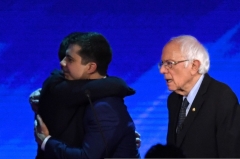 Former South Bend Mayor Pete Buttgieg, who Joe Biden has picked to be his Transportation secretary, sent out a tweet on December 26, wishing people a “joyful and meaningful Kwanzaa.”

“Wishing a joyful and meaningful Kwanzaa to all who are beginning their celebration tonight,” Buttigieg said in his tweet.

“Merry Christmas from our family to yours,” he said.

Kwanzaa, according to History.com, was created by a California college professor in the 1960s.

“Dr. Maulana Karenga, professor and chairman of Black Studies at California State University, Long Beach, created Kwanzaa in 1966,” says History.com. “After the Watts riots in Los Angeles, Dr. Karenga searched for ways to bring African Americans together as a community. He founded US, a cultural organization, and started to research African ‘first fruit’ (harvest) celebrations. Karenga combined aspects of several different harvest celebrations, such as those of the Ashanti and those of the Zulu, to form the basis of Kwanzaa.”