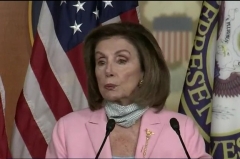 Catholic Archbishop Salvatore Cordileone of San Francisco, the diocese where House Speaker Nancy Pelosi (D.-Calif.) resides, published a commentary in the Washington Post on Sunday stating that you cannot be a good Catholic and support the killing of unborn children through abortion.

“You cannot be a good Catholic and support expanding a government-approved right to kill innocent human beings,” said Cordileone. “The answer to crisis pregnancies is not violence but love, for both mother and child.”

Cordileone specifically addressed the response of both Pelosi and President Biden—both of who profess to be Catholics—to Supreme Court’s refusal to issue an injunction against a Texas law that bans the abortion of babies who have a detectable heartbeat.

“As a faith leader in the Catholic community, I find it especially disturbing that so many of the politicians on the wrong side of the preeminent human rights issue of our time are self-professed Catholics,” said Cordileone.

You can read his full commentary for the Washington Post—which is headlined “Our duty to challenge Catholic politicians who support abortion rights”--by clicking here.