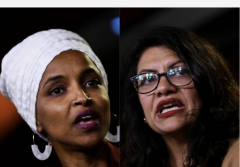 (CNSNews.com) - Rep. Ilhan Omar (D.-Minn.) and Rep. Rashida Tlaib (D.-Mich.) have joined Rep. Mark Pocan as the lead signers of a letter to Defense Secretary Lloyd Austin and Director of National Intelligence Avril Haines demanding to know if the U.S. government “is advancing systematic, warrantless surveillance of the Muslim-American community.”

“We write to express our alarm at recent reporting regarding government purchases of access to large quantities of personal data from apps including a widely-used Muslim prayer and Quran app and a popular Muslim dating app,” the members of Congress said in the letter.

“This disclosure raises serious concern that such information is advancing systematic, warrantless surveillance of the Muslim-American community contrary to the privacy protections guaranteed in the U.S. Constitution.”

The letter from these congressmen was referencing a Nov. 16 report posted on the “Motherboard” website, which is part of the Vice Media Group. The story was headlined: “How the U.S. Military Buys Location Data from Ordinary Apps.”

“The U.S. military is buying the granular movement data of people around the world, harvested from innocuous-seeming apps, Motherboard has learned. The most popular app among a group Motherboard analyzed connected to this sort of data sale is a Muslim prayer and Quran app that has more than 98 million downloads worldwide. Others include a Muslim dating app, a popular Craigslist app, an app for following storms, and a ‘level’ app that can be used to help, for example, install shelves in a bedroom.”

In their letter to the secretary of Defense and the Director of National Intelligence, the members of Congress asked several questions about this reported action.

“We wish to know more about these data purchases, the use of information gleaned from the data, and any possible violation of privacy rights granted by the Constitution and protected by law,” the congressmen wrote.

One question the congressmen asked was: “Has any warrantless surveillance occurred on any U.S. citizen using purchased location data?”

Another was: “Has any surveillance whatsoever occurred on any using citizen using purchased location data?”

Another was: “Were apps used primarily by the Muslim community targeted for data purchases? If so, which apps specifically?”

Another was: “Do the U.S. military or intelligence agencies currently possess location data of American citizens, including Muslim-Americans? If so, which agencies, and how was this data obtained?”

The members of Congress concluded their letter to the secretary of Defense and Director of National Intelligence with this statement; “It is imperative that every American citizen, no matter their ethnicity or religion, is certain their Fourth and First Amendment rights are not only protected, but equally enforced.”

Rep. Mark Pocan (D.-Wis.), the lead member on the letter, sent out a tweet with the Motherboard story.

“After reports that the U.S. military purchased Muslim users app data, @RepRachida, @Ilhan & I led a letter questioning the use & legality of acquiring this data,” said Pocan in his tweet.

“We cannot begin another administration with the systemic surveillance of Muslim communities,” he said.

On Friday morning, Rep. Omar forwarded his tweet in one of her own.

“For decades now, the Muslim community have had their civil liberties compromised, their rights abused, and their privacy ignored,” she said.

“The Biden Administration must provide a full explanation for this blatant abuse of power and ensure that it does not happen again,” she said.