NYT: "Records Make Clear That Hunter Biden Saw the Family Name as a Valuable Asset, Angrily Citing His ‘Family’s Brand’ as a Reason He is Valuable" 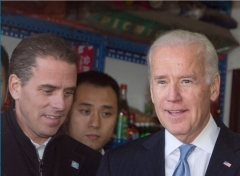 The New York Times ran a story on Monday that was headlined “Bidens and a China Deal: What We Actually Know” and that said in its lead sentence: “There is no evidence that the former vice president was involved in or profited from a joint venture pursued by his son and brother.”

“Mr. Biden's tax returns, which he has released, show no income from any such venture,” the Times notes.

The story focuses its analysis on “documents provided by Tony Bobulinski, a former business associate of Hunter and James Biden.”

“The records make clear that Hunter Biden saw the family name as a valuable asset, angrily citing his ‘family's brand'’ as a reason he is valuable to the proposed venture,” said the Times.

The Times then said: “The documents also show that the countries that Hunter Biden, James Biden and their associates planned to target for deals overlapped with nations where Joe Biden had previously been involved as vice president.”

“The messages produced by Mr. Bobulinski appear to reflect a meeting between him, the former vice president and James Biden in May 2017 in Beverly Hills, Calif. The messages do not make clear what was discussed.

“Mr. Bates did not answer questions about Mr. Bobulinski's claim that he met with the former vice president. But Mr. Bates said the Chinese deal never was discussed by Mr. Biden with members of his family. '’He never had any conversations about these issues at all,’ Mr. Bates said.

“One email sent on May 13, 2017, by another member of the venture discusses how the various partners in the deal could theoretically split up the equity and makes reference to whether ''the big guy'' might get 10 percent. The document does not specify who this person is, saying only ''10 held by H for the big guy ?''

“Mr. Bobulinski has said the reference was clearly to the former vice president.”