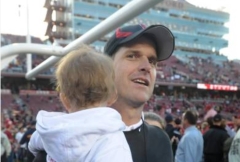 Jim Harbaugh, then the coach at Stanford, holds one of his children, as he walks of f the field after a game against Oregon at Stanford Stadium, Nov. 7, 2009. (Photo by Steve Dykes/Getty Images)

Jim Harbaugh, the coach of the University of Michigan football team, has twice spoken out in recent days in defense of the right to life of unborn babies.

Harbaugh, who played quarterback at Michigan then in the NFL, spoke at the Plymouth Right to Life Dinner, which was held July 17 at St. John’s Inn in Plymouth, Mich. His wife, Sarah, also spoke at the event.

The theme of the event was “We Were Made to be Courageous.”

“To me, the right choice is to have the courage to let the unborn be born,” said Harbaugh at the event, according to a report published by Detroit Catholic.

“I believe in having the courage to let the unborn be born. I love life,” said Harbaugh.

“I believe in having a loving care and respect for life and death,” he said. “My faith and my science are what drive these beliefs in me. Quoting from Jeremiah, ‘Before I formed you in the womb, I knew you. Before you were born, I set you apart. I appointed you as a prophet to the nations.'”

“Passions can make the process messy, but when combined with respect, it ultimately produces the best outcomes,” Harbaugh said about the abortion debate—in the wake of the Supreme Court’s overturning of Roe vs. Wade. “This process has been passionate and messy, but I have faith in the American people to ultimately develop the right policies and laws for all lives involved.

“I recognize one’s personal thinking regarding morality of a particular action may differ from their thinking on whether government should make that action illegal,” said Harbaugh. “There are many things one may hold to be immoral, but the government appropriately allows because of some greater good or personal or constitutional right.

“Ultimately, I don’t believe that is the case with abortion,” he said.

“Yes, there are conflicts between the legitimate rights of the mother and the rights of the unborn child. One resolution might involve incredible hardship for the mother, family and society. Another results in the death of an unborn person,” he said.

“In God’s plan,” he said, “each unborn human truly has a future filled with potential, talent, dreams and love. I have living proof in my family, my children, and the many thousands that I’ve coached that the unborn are amazing gifts from God to make this world a better place.

“To me, the right choice is to have the courage to let the unborn be born,” said Harbaugh.

Harbaugh’s wife, Sarah, recalled at the event that her parents used to pray at a local Planned Parenthood facility.

“From an early age, my mom and dad would go to a Planned Parenthood and pray,” said Sarah Harbaugh, according to Detroit Catholic.

“I feel my mom was a big influence for me, both my parents talked about protecting the unborn,” she said. “I have friends, even family, who have considered abortion or had an abortion, and I know they are not better for it.

“If we had more support for women, more people who knew what really happens, we would be in a different place on this issue,” said Sarah Harbaugh.

At the event, as reported by Detroit Catholic, Father John Riccardo of Our Lady of Good Counsel Parish in Plymouth, Mich., asked the Harbaughs if they worried about being “cancelled” for their defense of the pro-life cause.

“During halftime of a game, talking with the players, I say they are here because they have chosen to be here,” said Harbaugh. “If someone believes in what they stand for, they are choosing to stand for that position, and what kind of person are you if you don’t fight tooth and nail for what you stand for? You get to change hearts by fighting for what you stand for.”

Here is a transcript of the exchange about abortion that Harbaugh had with ESPN’s Gene Wojciechowski:

ESPN's Gene Wojciechowski: “Your faith is very important to you, and recently you made an appearance and spoke at a pro-life charity event. Why did you think that was important to do and did you receive criticism, support, after that, after that appearance?”

Harbaugh: “Yeah, like you said, I mean: Faith, family, football. I mean, those are my priorities. And, I just think that this issue of life, of saving life, the abortion issue, is one that is so big that it needs to be talked about. It needs serious conversation: What do you think? What do I think? What do others think? I mean, people really think about it. You know, not so much, like: Hey, I don’t want to get involved. It’s too big of an issue. It’s a life-or-death type of issue. You know, I believe in, and I respect people’s views, but let’s hear it, let’s discuss it, because there’s passion, there’s passion on both sides of this issue.”

ESPN's Gene Wojciechowski: “What would you do—and as you bring up this idea of a discussion and how important it is—what would you do if a player or a female staff member of the Michigan football team came to you and said: Coach, I respectfully disagree with your stance. Can we discuss it?”

Harbaugh:  Yeah, that’s what, that’s: Let’s discuss it. I’ve told them that, and it goes even further. What I’ve told--Same thing I tell my kids, the boys, the girls, same thing I tell our players, our staff members. I encourage them, if they have a pregnancy that wasn’t planned, go through with it. Go through with it. Let that unborn child be born, and, if at that time, you don’t feel like you can care for it. You don’t have the means or the wherewithal, then Sarah and I will take that baby. Any player on our team, any female staff member, any staff member, or anybody in our family, or our extended family that doesn’t feel like after they have a baby they can take care for it, we’ve got a big house and we’ll raise that baby.”