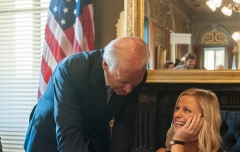 One photo of Joe Biden shows him almost completely bald on the top of his head, while two others shows him with a fair amount of hair remaining there.

The question: Which one was taken earlier in his life and which ones were taken later?

One might guess that a man would lose hair as he got older.

Yet, in the three photos below from Getty Images—one from 2012 and two other taken in 2021—Biden appears to have gained hair on the top of his head as time has passed.

Does that make you want to scratch your head?

This photo is from Parks and Recreation Season 5 and shows Vice President Joe Biden and Amy Poehler as Leslie Knope in a photo taken on Nov. 8, 2012. (Photo by David Giesbrecht/NBCU Photo Bank/NBCU Universal via Getty Images)

This photo was taken as President Joe Biden signed executive orders on Jan. 21, 2021 in the White House. (Photo by Mandel Ngan/AFP via Getty Images)

This photo was taken on Jan. 22, 2021 as President Joe Biden signed executive orders at the White House. (Photo by Alex Wong/Getty Images)