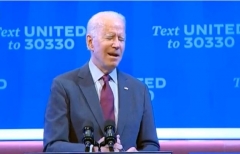 (CNSNews.com) - Former Vice President had “no comment” on Sunday when he was asked during a press conference whether he would take a drug test before his debate on Tuesday with President Donald Trump.

On the videotape of the press conference published online by CSPAN it is difficult to discern the exact words of the question asked by the reporter—although the words “drug test” and “debate” can be heard.

However, Politico reported on Sunday that the reporter was asking Biden about a tweet that Trump had sent out on Sunday morning.

Trump’s tweet said: “I will be strongly demanding a Drug Test of Sleepy Joe Biden prior to, or after, the Debate on Tuesday night. Naturally, I will agree to take one also. His Debate performances have been record setting UNEVEN, to put it mildly. Only drugs could have caused this discrepancy???”

Reporting on Biden’s response to the question a reporter asked him about this, Politico said: “Even Biden had to chuckle at Trump’s latest taunts, although the Democratic nominee opted against saying anything when a reporter asked him later Sunday about the president’s demand. ‘He’s almost…,’ Biden said before interrupting himself. ‘No. I have no comment.’”

Politico also published a statement made later by Biden deputy campaign manager Kate Beddingfield. The statement said: “Vice President Biden intends to deliver his debate answers in words. If the president thinks his best case is made in urine he can have at it. We’d expect nothing less from Donald Trump, who pissed away the chance to protect the lives of 200K Americans when he didn't make a plan to stop COVID-19.”