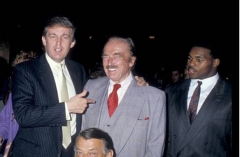 College Hall of Fame running back Herschel Walker on Tuesday retweeted a tweet that had been sent out by Bruce Levell, the executive director of the National Diversity Coalition for Trump.

“Under @realDonaldTrump black Americans are building businesses and generational wealth,” said the tweet.

It included a videoclip of Bruce Levell on Newsmax television arguing that President Trump has a “great, strong record” on the growth of black-owned businesses.