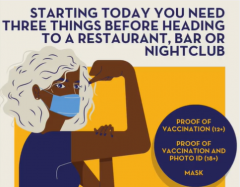 Democrat activists would have you believe it’s voter suppression to require a government-issued photo I.D. at the polls.

But in heavily Democrat Washington, D.C., you’ll need a photo I.D. to enter eating and drinking establishments and many other specified indoor venues.

As D.C Mayor Muriel Bowser tweeted on Saturday, “Friendly reminder that if you’re heading out to a restaurant, bar, or nightclub, starting today you will need:

According to the D.C. Health Department:

Businesses will also need to verify vaccination with photo identification for patrons ages 18 years and older, such as:

-- Any other state issued identification card

Those acceptable forms of I.D. are more stringent than those proposed by Democrats in the Senate’s "Freedom to Vote Act."