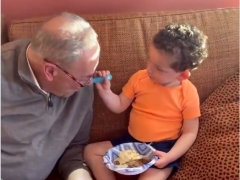 Senate Majority Leader Chuck Schumer (D.-N.Y.) sent out a tweet on Sunday that featured a video of himself eating ice cream off the spoon of Noah Melvin Schumer-Shapiro, his two-year-old grandson.

In the tweet, Schumer says: “Noah and his grandpa having ice cream!”