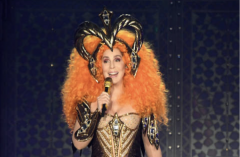 The singer Cher sent out a tweet on August 29 saying that the United States is getting closer to a dictatorship.

“Step By Step We Go Closer 2 Dictatorship,” Cher said in her tweet.

Cher’s tweet included a link to an Apple News story about the director of National Intelligence suspending in-person intelligence briefing about election security this fall.