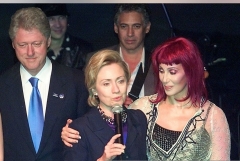 “There’s a Reason trump Slept With Mein Kampf,” Cher said in her tweet. “He Needed 2 Create Cult of Ppl Who’d Following him mindlessly,no Thought of His Evilness.

On April 17, 2019, Snopes published an analysis declaring as “False” a claim that: “Donald Trump said reading ‘Mein Kampf in college had a profound effect on him and he has tremendous respect for Adolf Hitler as a leader.”

“Did U.S. President Donald Trump once admit to reading the book Mein Kampf and being an admirer of its author, Nazi dictator Adolf Hitler?

“Those were the central claims in an internet meme that began making the social media rounds in mid-April 2019, which purported to quote Trump’s praising Hitler in a Time magazine interview published in 2002. We found instances of the meme’s being shared on both Twitter and Facebook, including a popular Facebook page titled “Joe P. Kennedy III for President 2020,” which does not appear to be owned or operated by Kennedy himself:….

“Not only were we unable to locate an original source for this quote, or evidence that Time magazine even interviewed Trump in 2002, but we found no discernible record of its existence before the meme first surfaced in April 2019. Yet it’s the kind of statement that would have been quoted ad nauseum in the press had Trump said it. No such references exist.”