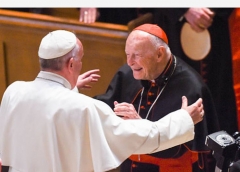 The Roman Catholic Church says that homosexual acts “are contrary to natural law” and “under no circumstances can they be approved.”

“Homosexuality refers to relations between men or between women who experience an exclusive or predominant sexual attraction toward persons of the same sex,” says paragraph 2357 of the Catholic Catechism as posted online by the Vatican.

“It has taken a great variety of forms through the centuries and in different cultures,” says the Catechism. “Its psychological genesis remains largely unexplained.

“Basing itself on Sacred Scripture, which presents homosexual acts as acts of grave depravity, tradition has always declared that ‘homosexual acts are intrinsically disordered,’” says the Catechism.

“They are contrary to the natural law. They close the sexual act to the gift of life,” the Catechism says.

“They do not proceed from a genuine affective and sexual complementarity,” the Catechism says.

“Under no circumstances can they be approved,” it says.