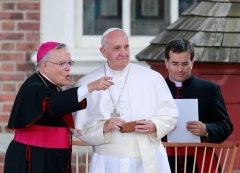 Archbishop Charles J. Chaput, the retired archbishop of Philadelphia has published an article in First Things stating that President Joe Biden, who supports abortion and same-sex relationships, should not receive Holy Communion.

“Mr. Biden has said that he will continue to advance those same policies as president, and thus should not receive Holy Communion,” Chaput wrote. “His stated intention requires a strong and consistent response from Church leaders and faithful.”

Chaput pointed out that how American bishops deal with Biden will have a significant impact “for good or ill” on those watching what the bishops do.

“In the year ahead, a great many people will be watching our nation’s Catholic leadership,” Archbishop Chaput said. “They will be led, for good or for ill, by the witness of America’s bishops.”

“When bishops publicly announce their willingness to give Communion to Mr. Biden, without clearly teaching the gravity of his facilitating the evil of abortion (and his approval of same-sex relationships), they do a serious disservice to their brother bishops and their people,” said Archbishop Chaput. “The reason is obvious. By his actions during the course of his public life, Mr. Biden has demonstrated that he is not in full communion with the Catholic Church. To his credit, he has championed many causes and issues that do serve the common good. However, many of his actions and words have also supported or smoothed the way for grave moral evils in our public life that have resulted in the destruction of millions of innocent lives.

“Mr. Biden has said that he will continue to advance those same policies as president, and thus should not receive Holy Communion,” said Archbishop Chaput. “His stated intention requires a strong and consistent response from Church leaders and faithful.”

“5. Regarding the grave sin of abortion or euthanasia, when a person’s formal cooperation becomes manifest (understood, in the case of a Catholic politician, as his consistently campaigning and voting for permissive abortion and euthanasia laws), his Pastor should meet with him, instructing him about the Church’s teaching, informing him that he is not to present himself for Holy Communion until he brings to an end the objective situation of sin, and warning him that he will otherwise be denied the Eucharist.

“6. When ‘these precautionary measures have not had their effect or in which they were not possible,’ and the person in question, with obstinate persistence, still presents himself to receive the Holy Eucharist, ‘the minister of Holy Communion must refuse to distribute it’ (cf. Pontifical Council for Legislative Texts Declaration “Holy Communion and Divorced, Civilly Remarried Catholics” [2002], nos. 3-4). This decision, properly speaking, is not a sanction or a penalty. Nor is the minister of Holy Communion passing judgment on the person’s subjective guilt, but rather is reacting to the person’s public unworthiness to receive Holy Communion due to an objective situation of sin.”