Biden in Fundraising Video: ‘Putin and the Russians Are Interfering in the Elections and…They’re Coming After Me’ 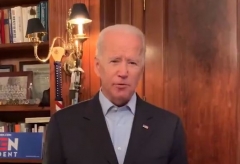 (CNSNews.com) - Former Vice President Joe Biden has pinned to the top of his Twitter page a tweet he sent out on Wednesday that includes a fundraising video in which he says “Putin and the Russians are interfering in the elections and…they’re coming after me.”

“Once again, Putin and the Russians are trying to engage in our elections and decide who the president’s going to be. And this time, I’m the object of their attention,” Biden says in the video.

“Mr. Putin, the American people decide their elections, not you,” Biden says.

On Monday, Biden had retweeted a CNN tweet about a story that network had done about Facebook shutting down accounts it believed were inauthentic and created by the Russians to impact the U.S. election.

In that tweet, Biden said: “The Russian Facebook trolls are back—and this time, they’re going after my campaign. We cannot let 2016 repeat itself.” The tweet then made a pitch for a contribution.

“Joe Biden was a top target of Russians who are building a network of accounts designed to look like groups in swing states, new Facebook data shows,” said the CNN tweet retweeted by Biden.

That tweet linked to an online CNN story that carried the headline: “Facebook: Russian trolls are back. And they’re here to meddle with 2020.”

“People linked to the Internet Research Agency, the Kremlin-backed troll group indicted by the United States for its alleged interference in the 2016 election, are laying the groundwork to do the same in 2020, new information released by Facebook on Monday suggests,” said the CNN report.

“Although the accounts posed as Americans from all sides of the political spectrum, many were united in their opposition to the candidacy of former Vice President Joe Biden, according to Graphika, a social media investigations company that Facebook asked to analyze the accounts,” CNN reported.

Facebook’s Head of Cybersecurity Policy, Nathaniel Gleicher, put out a statement on Monday about its actions regarding these accounts. The statement was headlined: “Removing More Coordinated Inauthentic Behavior From Iran and Russia.”

“Finally, we removed 50 Instagram accounts and one account on Facebook that originated in Russia and focused primarily on the US,” the statement said. “This campaign showed some links to the Internet Research Agency (IRA) and had the hallmarks of a well-resourced operation that took consistent operational security steps to conceal their identity and location. As we’ve seen before, this appears to have made it difficult for many of these accounts to build the following among authentic communities. The people behind this activity used fake accounts — some of which were previously detected and disabled by our automated systems as inauthentic and engaged in spam. These accounts followed, liked and occasionally commented on others’ posts to increase engagement on their own content.”

“The people behind this operation often posted on both sides of political issues including topics like US elections, environmental issues, racial tensions, LGBTQ issues, political candidates, confederate ideas, conservatism and liberalism,” said the Facebook statement. “They also maintained accounts presenting themselves as local in some swing states, and posed as either conservatives or progressives.”

Biden’s tweeted video on Wednesday focused on the Russian action reported in the CNN story he had retweeted on Monday.

“Folks, you hear the news? Once again, Putin and the Russians are trying to engage in our elections and decide who the president’s going to be. And this time, I’m the object of their attention.” Biden says in the video he has posted on Twitter. “Because Putin knows if I am president of the United States his days of tyranny and trying to intimidate the United States and those in Eastern Europe are over.

“I am going to stand up to him. He’s a bully, just like the president,” Biden says in the video. “And I know he doesn’t want me to be president, but to tell you what, when I am president things are going to change. Mr. Putin, the American people decide their elections, not you.”

Then he makes fundraising appeal.