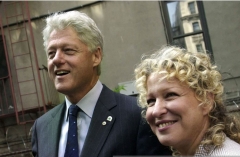 Singer Bette Midler sent out a tweet on Wednesday night expressing her belief that President Donald Trump will do “something nuts” to distract attention from what she anticipated to be an imminent announcement by the Manhattan District Attorney’s office.

“Which means Trump’s thinking of something nuts to throw out at that exact moment to distract,” Midler said.

“Tomorrow may be the day he tweets a dick pic!” she said. “Can’t wait.”

On Wednesday, MSN published a story about the subpoena the Manhattan district attorney’s office had issued to Deutsche Bank. It said:

“The New York prosecutors who are seeking President Trump’s tax records have also subpoenaed his longtime lender, a sign that their criminal investigation into Mr. Trump’s business practices is more wide-ranging than previously known.

“The Manhattan district attorney’s office issued the subpoena last year to Deutsche Bank, which has been Mr. Trump’s primary lender since the late 1990s, seeking financial records that he and his company provided to the bank, according to four people familiar with the inquiry.”