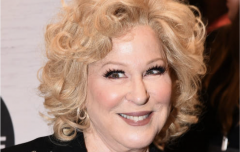 Singer Bette Midler sent out some tweets on Thursday giving her analysis of how she believes the Trump Administration is reacting to former Vice President Joe Biden picking Sen. Kamala Harris (D.-Calf.) as his running mate.

“Donnie! You know, sweetie, you have called women nasty, wacky, and low IQ but I see now you’re calling @SenKamalaHarris a madwoman,” Midler said in one tweet.

“You poor little thing,” she continued, “you must be shitting bricks! Your learning new words.”

In another tweet, she aimed at Vice President Mike Pence.

“I wonder if #MikePence’s wife aka ‘mother’ will let him be on stage ALONE with #KamalaHarris,” said Midler.

“Great speech by #JoeBiden, and her comes #KamalaHarris!” Midler said in yet another tweet. “Thank God! The cavalry has arrived!!”