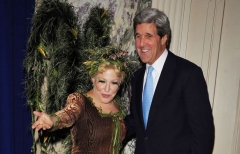 Singer Bette Midler sent out a tweet on Thursday afternoon in which she said that President Donald Trump “is going to steal the mail-in ballots somehow.”

Midler’s tweet forwarded a tweet put out by the organization “When We All Vote.” On its website, it describes itself as a “non-profit, nonpartisan organization that is on a mission to increase participation in every election and close the race an age voting gap.”

“Launched in 2018 by co-chairs Michelle Obama, Tom Hanks, Lin-Manuel Miranda, Janelle Monae, Chris Paul, Faith Hill and Tim McGraw, When We All Vote is changing the culture around voting using a data-driven and multifaceted approach to increase participation in elections,” says the organizations website.

The tweet by this organization that Midler forwarded said: “This election, it’s not enough just to vote. We’ll need to VOTE LOUD. It’s up to us to make sure we are heard. Make a plan to #VOTELOUD today.”

Midler’s tweet said: “By LOUD we mean go to the polling stations if you can, because Trump is going to steal the mail-in ballots somehow.”