Bette Midler: ‘Ted Cruz…First Hispanic Person to Flee FROM Texas TO Mexico Because of ICE’ 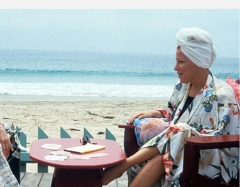 Bette Midler sitting on a beach patio in a scene from the film "Beaches," 1988. (Photos by Touchstone/Getty Images)

Singer Bette Midler sent out a couple of tweets at the end of last week attacking Sen. Ted Cruz (R.-Texas) for briefly accompanying his wife and children to Cancun, Mexico when a winter storm was hitting his home state of Texas.

“Ted Cruz continues to be a trailblazer as he become the first Hispanic person to flee FROM Texas TO Mexico because of ICE,” Midler said in a graphic attached to a tweet sent out on Thursday.

The tweet included a video of Cruz addressing CPAC on Friday and making a joke about his trip to Cancun. “I got to say,” Cruz said at the beginning of his talk, “Orlando is awesome. …. It’s not as nice as Cancun.”

Cohen’s tweet said: “‘I gotta say, Orlando is awesome. It’s not as nice as Cancun…’ says Ted Cruz, joking about that time he abandoned his state so that he could stay at the Ritz Carlton while a number of Texans froze to death.”