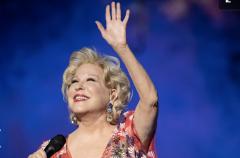 Singer Bette Midler put out a tweet on Monday saying that “more people have died on #DonaldTrump’s watch than died in the bombing of Hiroshima.”

“More people have died on #DonaldTrump’s watch than died in the bombing of Hiroshima, one of the most horrific crimes ever perpetrated on humans,” said Midler.

According to a report published by the Pew Research Center, the estimated deaths resulting from the Hiroshima bombing “range from 66,000 to 150,000.”

According to the CDC, 132,245 COVID-19-involved deaths in the United States had been reported as of July 27. However, the CDC COVID-19 death counts for each week, which are based on official death certificates, continue to be updated over a period of weeks as the reports are filed by local jurisdictions.

Johns Hopkins University was reporting as of July 27, that there had been 147,253 COVID-19 deaths in the United States.