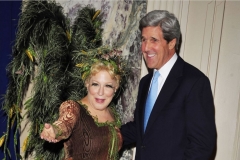 Singer Bette Midler sent out a tweet late on Sunday saying that she believes President Donald Trump was envious of the police officer who knelt on George Floyd’s neck.

“I can only imagine the envy with which #Donald watched Derek Chauvin’s casual cruelty and monstrous indifference as he murdered #GeorgeFloyd,” Midler said.

“I can only imagine that Donald wishes it had been his knee on Floyd’s neck,” she said.