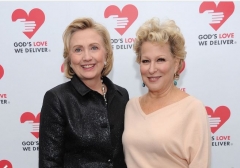 “The election of BarackObama was the defining event of Donald Trump’s rise,” said Midler.

“There are really no words to describe his hatred of Obama; this was when I began to witness the increasingly reactionary & unhinged ArchieBunker racism that defined Trump and his views on modern America,” Midler tweeted.

“When Obama won the Nobel Peace prize, Trump went ballistic, as if the universe were playing a trick on him to drive him out of his mind; like he was hearing voices, the way he ranted & raved about how beloved Obama was by so many Americans,” said Milder.

“He thought acting Presidential was just that. ‘An Act’…’ MichaelCohen in ‘Disloyal,’” said Midler. “…eye-popping, jaw dropping, staggering. And so, so sad for the rest of us.”