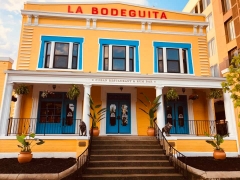 (CNS News) – Friends and business supporters of Fernando Martinez, a Cuban restaurant owner in Louisville, Ky., gathered at his La Bodeguita de Mima restaurant on Sunday to rally in his defense against protesters who are upset that he refuses to sign a letter pledging “representation and reparations” to blacks in the community.

Martinez, who says he supports the Black Lives Matter (BLM) movement, described the demand-letter as nothing more than “mafia tactics,” reported the Courier-Journal.

Martinez immigrated to the United States from Cuba to get away from socialism. He started his restaurant La Bodeguita de Mima in NuLu, a neighborhood in Louisville, Kentucky.

As reported by FaithWire and the Courier-Journal, Louisville BLM leader Phelix Crittenden established a group called “Blacks Organizing Strategic Success” (BOSS), which claims it is a “creative cooperative designed to level the playing field.” On its “Social Justice” page, BOSS states it is “holding Louisville businesses accountable, and we’re starting in NuLu.”

On that page, BOSS explains its “Social Justice Rating System,” which ranks NuLu businesses as A-Ally, C-Complicit, and F-Failed. Scores are calculated based upon whether the NuLu business is at least 23% black or persons of color (BIPOC); 23% of inventory is from BIPOC retailers; “regular donations” are made to BIPOC organizations; and “dress code policy does not discriminate against BIPOC patrons or employees.”

Numerous NuLu restaurants and bars are ranked F by the group and a few are ranked A and C.

A letter with the staff quotas and related demands was posted in NuLu’s Eastern Market District, according to the Courier-Journal. It is this letter that Martinez refused to sign or support. (Read letter here.)

In the document, the left-wing protesters state that, “Black Representation in the civic structure of the Nulu Business District in positions of ownership, leadership, and employment is essential to demonstrate the district's support for, and value of diversity in its establishments and development.”

“Currently, over 90% of the establishments in the NuLu business district are white-owned; the staff and vendors of those businesses are also overwhelmingly white,” reads the letter. “To correct this lack of representation, I [business owner] commit to increasing Black representation in my business operations, and this shall include:

“23% Black vendors whose products are offered on my shelves.

“If my business does not have access to a sufficient pool of Black vendors for our products, I will donate l.5% of our monthly profits to financially empower the Black Lives Matter Organization and Movement

“23% Black business and board membership in the NuLu Business Association.

“This initial level of representation shall be achieved by August 17, 2020, with incremental increases of 5% in each 6 month period.”

The letter also demands that the businesses (“all my staff”) attend diversity training and “roundtable discussions facilitated by Black womxn leaders” to ensure the businesses are in compliance with the race-based commands. Also, the businesses must “accept responsibility for the cost of the initial and quarterly trainings.”

If the businesses do not comply by Aug. 17, the radical activists will take some of the following actions:

-- Boycott: Public boycott. coordinated through social media and mail announcements, of your NuLu establishment AND any other business ventures owned by you.

-- Invasive Reclamation: Placement of booths/tables outside your establishment where competing Black proprietors will offer items comparable to those offered by you.

“There comes a time in life that you have to make a stand and you have to really prove your convictions and what you believe in,” said Martinez.  “All good people need to denounce this. How can you justify injustice with more injustice?”

After saying he would not meet the demands, Martinez’s restaurant was vandalized, and he and his family were reportedly threatened by protestors, according to local media.

On Sunday, people showed up to La Bodeguita to show their support for Martinez and to warn Americans about socialism. Many showed up with signs that said, “No 2 Socialism in America” and “We left Cuba because of socialism. Be careful what you wish for,” and “We are Peaceful People but Don’t Tread on us.”

Luis David Fuentes, a Cuban immigrant present at the rally, told the Courier-Journal, “Although our community has achieved great success in this city, we continue to miss our homeland, our neighbors we grew up in, and our families we left behind. We did not want to leave all of those, but we had to. We had to escape the socialist government that took away our grandparents’ private businesses in 1959 and continue to restrict our civil and political rights today.”

At La Bodeguita De Mima on E. Market St, where members of Louisville’s Cuban community are gathering to show support for owner Fernando Martinez. He said he was threatened by BLM protesters, who sent letters to business owners in NuLu demanding to improve diversity in the area. pic.twitter.com/sFJR5c0KNM

Betty Weyenberg, president of Cuban American Association of Kentucky echoed Fuentes’ statement when she said, “We came here not because we wanted to come. We fell in love with your city and your country after being here because you welcomed us. We are here to defend the freedom that you all gave us that we didn’t have.”

Louisville Urban League CEO Sadiqa Reynolds had a different take on Martinez’s stance. She said, “I understand that the owner of La Bodeguita De Mimi [sic] has decided to proactively organize against the idea that Black Lives Matter. Rather than respond to demands tendered, even in the negative, and affirm that he is aware of the pain our people are in, instead he chooses to highlight what he believes is his superiority.”

Martinez defended his position by saying, “With the Internet nowadays, you’re easily and quickly discounted and disqualified. ‘Oh, you don’t agree with everything I believe? You’re a racist, you’re a bigot, and that’s that.’ There’s people out there trying to define me as a man and trying to define my business, and they don’t know who we are.”