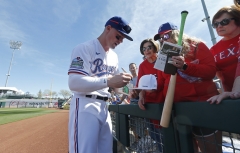 On Monday, the same day the Washington Redskins announced they would be retiring their name, an editorial was published in The Washington Post calling for the Texas Rangers to do away with their name because of its “racist implications.”

“To know the full history of the Texas Rangers is to understand that the team’s name is not so far off from being called the Texas Klansmen,” Attiah argued.

She claims she was raised on myths that Texas Rangers were brave and wholesome guardians of the Texas frontier. But today, Attiah says, she considers the Rangers “a cruel, racist force”:

“What we didn’t realize at the time was that the Rangers were a cruel, racist force when it came to the nonwhites who inhabited the beautiful and untamed Texas territory.”

Attiah accused the Rangers of playing a role in the capture of runaway slaves, being involved in racial violence along the Texas-Mexico border, and helping to prevent school integration in the 1960s.

In June, responding to a similar column in The Chicago Tribune calling for the removal of the Texas Rangers baseball team name, the team issued a statement in response, saying its name has “forged its own, independent identity.”

In response to the calls for the Rangers’ name change, Spectator USA Editor Amber Athey mockingly tweeted that “Many pirates were involved in the slave trade. The Pittsburgh Pirates’ team name must go” - and National Review Senior Writer Michael Brendan Dougherty saracastically suggested that teams named after “Indians, Yankees, Vikings, and Irish, got to go too.”

Indeed, other baseball teams, such as the Cleveland Indians and the Atlanta Braves, as well as the NFL’s Kansas City Chiefs, have come under fire for their names because of some perceived offense.