Kanye West: Saying that ‘The Black Vote Is Democratic Is a Form of Racism and White Supremacy’ 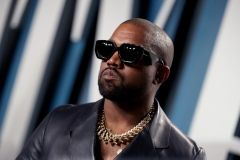 “To say that the Black vote is Democratic is a form of racism and white supremacy,” Rapper Kanye West says in an interview published on Tuesday. Following Kanye West’s announcement this past weekend that he plans to run for president of the United States, Forbes interviewed West to discuss his presidential bid.

West then took issue with white men, like former Vice President Joe Biden, who claim that anyone who doesn’t vote Democrat is “not Black”:

“And that’s what the Democrats are doing, emotionally, to my people. Threatening them to the point where this white man can tell a Black man if you don’t vote for me, you’re not Black.”

In May, Democratic presidential candidate Biden appeared on “The Breakfast Club,” a popular nationally-syndicated radio show and said “Well, I tell you what: if you have a problem figuring out whether you’re for me or Trump, then you ain’t black.”

West said he found it incredulous that Black Americans could ignore Biden’s claim:

West has previously shown support for President Trump, wearing the iconic red Make America Great Again hat. But, now he says that he has lost confidence in Trump over reports that he hid in the bunker during White House protests.

“I would run as a Republican if Trump wasn’t there. I will run as an independent if Trump is there,” West told Forbes.

He says he now thinks both Trump and Biden should drop out of the race:

“A lot of times just like political parties they feel all Blacks have to be Democrat. This man, Joe Biden, said if you don’t vote for me, then you are not Black. Well, act like we didn’t hear that? We act like we didn’t hear that man say that? That man said that. It’s a rap. We gonna walk, all the people. Jay-Z said it best. For the other candidates, I just gracefully suggest y’all bow out—Trump and Biden, gracefully bow out. It’s God’s country, we are doing everything in service to God, nobody but God no more. I am in service of our Lord and savior, Jesus Christ, and I put everything I get on the line to serve God.”

“I am pro-life because I’m following the word of the Bible,” West told Forbes when asked about his stance on abortion. Formerly pro-choice, West now is a strong pro-life advocate.

“Planned Parenthoods have been placed inside cities by white supremacists to do the Devil’s work,” West told Forbes.