Gun Permits Up 500% and Sales Skyrocket Amid Chicago Protests 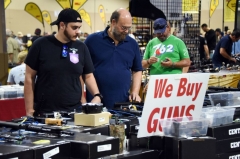 As protests continue in Chicago, applications for Illinois firearms permits have been up 501% from June 1 to June 17 compared to 2019, according to the Chicago Tribune.

There were more than 42,000 applications for Firearms Owners Identification (FOID) cards compared to about 7,000 during the same 2019 period.

The firearms services bureau of the Illinois State Police, which issues the FOID cards, told the Tribune that permit applications started rising in March but skyrocketed in June.

Background checks for the sale of firearms have been increasing since the start of the coronavirus pandemic, the National Shooting Sports Foundation reported.

The recent spike in applications during June coincides with protests and outbreaks of violence in Chicago.

In one weekend from mid-afternoon June 19 to early June 22, at least 106 people were shot, and 14 of those were killed.

According to data from Chicago’s Inspector General, arrests had fallen off a cliff after the outbreak of the pandemic with a drop of nearly 75% in arrests.

As of June 4, the Chicago police were on pace for the most arrests in a single week since the city’s inspector general started tracking arrest data in 2017, according to local Chicago News WBEZ. Over 1,400 arrests were made between May 31 and June 3. The arrests came as protests broke out against police violence resulting in widespread looting and vandalism. Before the outbreak, arrests had been down.

The Chicago Tribune spoke to Dan Eldridge, owner of Maxon Shooter’s Supplies and Range in Des Plaines, who said that a stat that jumped out to him was defensive ammunition. “We saw May 2020 over May 2019 firearms sales were twice as high, and defensive ammunition was ten times as high.”

As civil unrest continues, Americans are embracing their Second Amendment rights as a way to ensure safety and protection for themselves and their families.