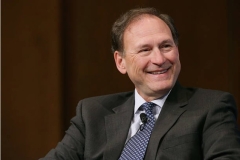 (CNSNews,com) - The Supreme Court has voted to overturn Roe v. Wade and Planned Parenthood of Southeastern Pennsylvania v. Casey, its precedents that declared there was a right to abortion in the United States.

“The Constitution does not confer a right to abortion; Roe and Casey are overruled; and the authority to regulate abortion is returned to the people and their elected representatives,” said the syllabus of the decision released today by the court.

The majority opinion, as expected, was written by Justice Samuel Alito. He was joined by Justices Clarence Thomas, Neil Gorsuch, Brett Kavanaugh, and Amy Coney Barrett.

Chief Justice John Roberts wrote a separate opinion that was “concurring in the judgment" on the Mississippi law at issue in the case, but rejected the court's decision to completely overturn Roe and Casey.

"My point is that Roe adopted two distinct rules of constitutional law: one, that a woman has the right to choose to terminate a pregnancy; two, that such right may be overridden by the State's legitimate interests when the fetus is viable outside the womb," wrote Roberts in his separate opinion.

"The latter is obviously distinct from the former," Roberts continued in his opinion. "I would abandon the timing rule, but see no need in this case to consider the basic right."

Thomas and Kavanaugh also wrote concurring opinions in addition to joining Alito in his decision.