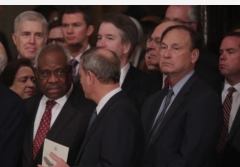 (CNSNews.com) - The majority opinion of the Supreme Court in the case of Dobbs vs. Jackson Women’s Health, which reviewed the constitutionality of a Mississippi law that prohibited abortions after 15 weeks gestation, plainly states that the 14th Amendment does not protect a right to abortion.

The 14th Amendment says in part that “nor shall any State deprive any person of life, liberty, or property without due process of law; nor deny to any person within its jurisdiction the equal protection of the law.”

One argument in favor of a right to abortion insists that it is an element of the “liberty” protected by this amendment.

The Supreme Court rejected that argument in its decision in Dobbs.

“In interpreting what is meant by the Fourteenth Amendment’s reference to ‘liberty,’ we must guard against the natural human tendency to confuse what that Amendment protects with our own ardent views about the liberty that Americans should enjoy,” Alito wrote in the opinion of the court.

“That is why the Court has long been ‘reluctant’ to recognize rights that are not mentioned in the Constitution,” Alito wrote.

Chief Justice John Roberts filed “an opinion concurring in the judgment” on the Mississippi law at issue in the case, but indicated that he would not have completely overturned Roe and Casey.

Thomas and Kavanaugh, in addition to joining the opinion Alito, also wrote their own concurring opinions.