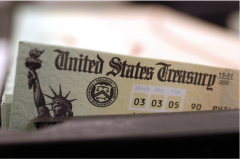 (CNSNews.com) - The federal government sent nearly 1.2 million “economic impact payments” authorized by the Coronavirus Aid, Relief, and Economic Security (CARES) Act to people who were dead and, therefore, not qualified to receive them, according to a report published today by the Government Accountability Office.

“Treasury and IRS sent almost 1.2 million economic impact payments totaling $1.6 billion to deceased individuals,” the GAO said in its report, which is entitled “COVID-19: Brief Update on Initial Federal Response to the Pandemic.”

“In June 2020, we recommended that IRS consider cost-effective options for notifying ineligible recipients on how to return payments,” said the GAO report. “IRS agreed with this recommendation.

“Treasury and IRS have taken steps to implement this recommendation and are considering further actions,” it said. “Currently, IRS has instructions on its website requesting that individuals voluntarily mail the appropriate economic impact payment amount sent to the decedent or incarcerated individual back to IRS, for both electronic and paper check payments. The envelopes in which paper checks were sent also have a checkbox to indicate if the recipient is deceased, which then could be mailed back to the Bureau of the Fiscal Service. Treasury has also held and canceled payments to decedents along with those that have been returned.”

“According to a Treasury official,” said the GAO report, “of the $1.6 billion in economic impact payments sent to decedents, nearly 70 percent have been recovered.

"However,” said GAO, “we were unable to verify that amount by the time we finalized our work on this report.

“We are working with Treasury to determine the number of payments sent to decedents that have been recovered,” said the GAO.

“Treasury was considering sending letters to request the return of outstanding checks and the repayment of amounts already paid by direct deposit or by checks that have been cashed,” said the GAO. “However, Treasury has not moved forward with this effort because, according to Treasury, Congress is currently considering legislation that would clarify or change the eligibility requirements of the payments, including payments to deceased and incarcerated.”

Below is a screen capture from the GAO report--“COVID-19: Brief Update on Initial Federal Response to the Pandemic"--explaining the situation with the nearly 1.2 million economic impact payments that were sent to dead people:

The GAO said it had recommended that Congress consider enacting legislation to allow the Treasury full access to the Social Security Administration’s data on deaths.

“In June 2020, the Senate passed S.4104, referred to as the Stopping Improper Payments to Deceased People Act,” said the report. “If enacted, the bill would allow SSA to share these data with Treasury’s Bureau of Fiscal Service to avoid paying deceased individuals.”