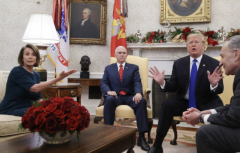 Thus, the federal debt increased by more than $1 trillion in just 28 days.

The chart below shows the date on which the federal debt surpassed each trillion-dollar threshold from $5 trillion to $25 trillion:

That is the fastest that the federal debt has ever climbed from one trillion-dollar threshold to the next. Prior to this, the fastest jump from one trillion-dollar threshold to another was the 159 days it took to increase from $23 trillion to $24 trillion. The debt first surpassed $23 trillion on Oct. 31, 2019. It then surpassed $24 trillion on April 7, 2020.

In its annual report to Congress on the nation’s fiscal health, which was published in March, the Government Accountability Office, said the federal government’s “fiscal path is unsustainable.”

“Although each of these long-term projections uses somewhat different assumptions, their conclusions are the same: over the long term, the imbalance between spending and revenue that is built into current law and policy will lead to (1) deficits exceeding $1 trillion each year beginning in fiscal year 2020 and (2) both the annual deficit and cumulative total debt held by the public continuing to grow as shares of GDP,” said GAO.