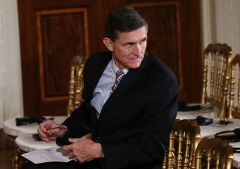 Jordan has just written a letter to Wray, requesting that he "immediately review the actions of the FBI in targeting LTG Flynn.”

In his letter to Wray, Jordan wrote:

The American people continue to learn troubling details about the politicization and misconduct at the highest levels of the FBI during the Obama-Biden Administration. Even more concerning, we continue to learn these new details from litigation and investigations -- not from you. It is well past time that you show the leadership necessary to bring the FBI past the abuses of the Obama-Biden era.

Priestap reportedly penned the handwritten note,  recently released, that questioned the FBI's motives in talking to Flynn: "What's our goal?" Priestap wrote: "Truth/Admission or to get him to lie, so we can prosecute him or get him fired?"

Former FBI Director James Comey has admitted that Flynn probably did not know the real reason the agents were talking to him. The FBI did so without going through the White House Counsel's office, which the FBI probably wouldn’t have gotten away with in another administration, Comey later said.

Jordan is asking for all documents and communications relating to the FBI's investigation of Flynn; and all documents and communications among the FBI and other executive branch agencies, including the Executive Office of the President, for the period December 1, 2016 to January 20, 2017, referring or relating to LTG Michael Flynn’s December 30, 2016, conversation with (Russian Ambassador to the U.S.) Sergey Kislyak.

Jordon told Fox News's Laura Ingraham on Monday, "We want the documents, we want the 302 (Flynn interview summary) that was changed, Laura, and we want to talk to the agents who were there when they interviewed Mike Flynn and why they changed that 302.

“So give us the documents, let us talk to Mr. Pientka, the guy who was in the room with Peter Strzok when they interviewed Mr. Flynn.

“That's what we want to see. We gave him 'til May 18th. Let's hope he gives us that information. We should have had it a long time ago, but hopefully we'll get it by the 18th.”

Sidney Powell, Flynn's attorney, told Sean Hannity Monday night she is still trying to pry information out of the FBI and Flynn's previous lawyers from the Covington & Burling law firm.

She told Hannity that text messages exchanged between Peter Strzok and Lisa Page show the original 302 (the summary of the FBI interview with Flynn) was edited "completely."

"In fact, Strzok talks about trying to keep the previous agent's voice in it, he has edited it so much. We still don't have the original 302. We know there 's another draft from the Strzok-Page text messages.

“And from Covington, we’re still trying to get Eric Holder and Michael Chertoff's emails, phone records, and possible text messages among the Covington lawyers themselves discussing Gen. Flynn and also any communications between Eric Holder and Loretta Lynch or Sally Yates about the Flynn matter.”

Hannity asked Powell what she expects to receive in the next few days:

"We've been told we’ll be getting a lot more text messages between people at the FBI," she responded.

"I would expect that we get the original 302 and probably another draft, and other documents that we know is completely exculpatory of the general, who is unlike anyone else Mueller prosecuted, because they completely made up crimes against him."

Note: In a May 3 op-ed in the Wall Street Journal, "veteran FBI agent" Thomas Baker writes that "the alteration of an FBI agent’s account of the Flynn interview" deserves more attention than it's getting:

As an FBI supervisor, I reviewed hundreds of FD-302s. Other than an occasional grammatical correction, I never changed a word.

So it was shocking for me to read the newly released text messages between Peter Strzok, then deputy assistant director of the FBI’s Counterintelligence Division, and Lisa Page.

They show that after Mr. Strzok and Agent Joe Pientka interviewed Mr. Flynn, Mr. Strzok heavily edited Mr. Pientka’s FD-302—to the point that he told Ms. Page he was “trying not to completely re-write” it.

Even more shocking, Ms. Page, an FBI attorney who wasn’t an agent and wasn’t at the interview, provided edits.

Worse still, the FD-302 that was eventually provided to the court wasn’t that of the agents’ interview of Mr. Flynn. It was instead a FD-302 of an interview of Mr. Strzok, conducted months later, about his recollections of the original interview. Truly bizarre.