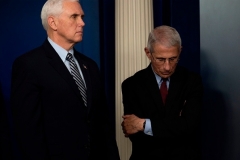 Vice President Mike Pence and Director of the National Institute of Allergy and Infectious Diseases Dr. Anthony Fauci listen as US President Donald Trump speaks during one of his many briefings on the novel coronavirus. (Photo by JIM WATSON/AFP via Getty Images)

"I don't know there has ever been a more accessible president of the United States than President Donald Trump," Pence told Fox News:

Walking to the airplane, walking to the helicopter, press briefings -- this president has been straight with the American people. When you look at the way he has led through this pandemic, that's also been true.

Honestly, Tony Fauci put it so well yesterday when he said everything that our health experts told the president in the Oval Office he told the American people, okay? And it's important that people understand that. That's what I saw as well.

I actually didn't sense the president was downplaying anything. We were giving the American people the facts as we knew them, as we learned them every step of the way.

Pence added that it is important for the president to "project confidence" in moments of crisis so Americans "understand that we were deploying the full resources of the federal government, calling forth the full power of the American economy to meet this moment.”

Dr. Anthony Fauci, the nation's leading voice on infectious diseases, told Fox News on Wednesday, "I didn’t get any sense that he (Trump) was distorting anything.”

“In my discussions, and the discussions of other task force members with the President, we’re talking about the reality of what was going on. And then when we would get up in front of the press conferences –- which were very, very common after our discussions with the President -– he really didn’t say anything different than what we discussed when we were with him.

Fauci added that his discussions with Trump “were always straightforward about the concerns that we had, we related that to him, and when he would go out, I’d hear him discussing the same sort of things. He would often say, ‘We just got through with a briefing with the group from the task force’ and would talk about it."

In several interviews Trump gave to author Bob Woodward, the president said coronavirus was more deadly than…even your strenuous flu’s.” That was on Feb. 7.

On March 19, Trump told Woodward, “Well I think, Bob, really, to be honest with you, I wanted to -- I wanted to always play it down. I still like playing it down because I don't want to create a panic."

Pence said on Thursday, “It is important to remember the president made that (March 19) comment four days after we shut down the entire American economy to put the health of America first. And so look, from the moment he tasked me to lead the White House Coronavirus Task Force, the president made it clear he wanted us to deploy the full resources of the federal government, a whole of America approach, and the progress that we have made, I believe, has literally saved hundreds of thousands if not millions of lives."

Likewise, Fauci noted that Trump, after hearing “cold facts” from the experts, “Often he would want to make sure that the country doesn’t get down and out about things, but I don’t recall anything that was any gross distortion in things that I spoke to him about.”

Pence told Fox News that from the earliest days of the emerging pandemic, when Trump suspended travel from China on Jan. 31, "this president put the health of America first."

Pence noted that work on a vaccine began the first week in February, while the first case of community transmission in the U.S. happened at the very end of February.

“So look, you know, hindsight is 2020, recriminations,” Pence said.