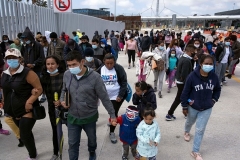 Migrants and asylum seekers in Tijuana ask US authorities to let them into the United States on March 23, 2021. (Photo by GUILLERMO ARIAS/AFP via Getty Images)

(CNSNews.com) - "It's a huge problem," Vice President Kamala Harris told CBS News on Wednesday morning when she was asked about the tens of thousands of people, many of them children, pouring across the U.S. border, apparently believing that President Joe Biden has welcomed them in. (Certainly the Biden administration has done nothing to discourage the influx.)

"Well, okay, look, it's huge problem. I'm not going to pretend it's not. It's a huge problem. And are there -- are we looking at overcrowding at the border in particular of these kids? Yes," Harris said.

"Should these kids be in the custody of HHS, the Health and Human Services instead of the Border Patrol? Yes. Should we be processing these cases faster? Yes.

"This is, however, not going to be solved overnight. There are things that we need to do, especially since there was a system in place, previously, before last administration, to allow us to process these kids in their country of origin. That was dismantled. We've got to reconstruct it. It's not going to happen overnight."

Harris noted that "we have senior administration officials right now in Mexico and Guatemala" discussing ways to prevent people from making the dangerous trip north.

"The reality also is that in addition to the border we also need deal with the root causes. We need to deal with what's happening in the Northern Triangle and address it in a way that is about not only diplomacy but bringing our allies together, dealing with what we need do around aid in a way that is about developing those countries so that we also deal with the cause of why people are coming into our country."

Pressed on how to prevent 500 children a day from flowing into the United States, as is now happening, Harris repeated that we have to "actually reconstruct the systems" needed to process the children’s asylum claims.

"And that is taking some time. Look, we've been in office less than 100 days. We are addressing it. We're dealing with it. But it's going to take some time. And are we frustrated? Are you frustrated? Yes. We are," Harris said.

Graham tells Biden and Harris, go to the border now!

Sen. Lindsey Graham (R-S.C.) told Fox News on Tuesday night that he's going to the southwest border with a group of senators on Friday:

And if I'm denied the ability to look into anyplace I want to go, we're going to shut the Senate down.

Where are all the liberal hypocrites? Where's AOC? Where's Elizabeth Warren? Where is Vice President Harris who basically protested outside of the facility in Homestead, Florida, during the Trump years holding migrant children?" Graham asked:

So, here's my message: President Biden, Vice President Harris, with all due respect, get off your ass, go to the border and look and see what you have caused by policies that will not work, quit denying the obvious.

This is not a crisis? It's beyond a crisis. It's a national security disaster in the making. It's inhumane situation caused by bad policies.

It will never change, President Biden, until you tell everybody to go home and stop releasing people into the United States. If you're not willing to do those two things, we'll have a million or two people at our border by June.

"Word is now out all over Central America, the 'remain in Mexico' policy is being abolished," he said. "If you get to America, they're going to release you in America. They have created this problem because they changed policies that are working. Where are the liberals going to the border and looking at the kids like they did with Trump?

"President Biden needs to get to the border along with his vice president right now. You need to go to the border, Mr. President."